On his show Last Week Tonight, John Oliver recently came up with a neologism that I feel ranks with such terms as Stephen Colbert’s 2005 coinage of “truthiness.” On the subject of net neutrality, the blatant conflict of interest inherent in former cable industry lobbyist Tom Wheeler being appointed to the position of Federal Communications Commission chairman was described by Oliver as “the equivalent of needing a babysitter and hiring a dingo.” 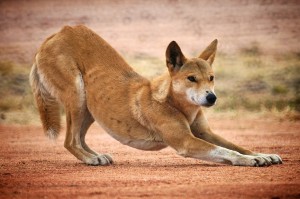 Not a fox, but a dingo. Photo courtesy of Matthias Siegel via Flickr under a Creative Commons license.

Oliver and Wheeler have traded barbs with each other since the original show aired in June 2014, thereby spreading the terminology further across the the internet. (Also note that when asked about the show at an FCC open meeting, Wheeler said that he had needed to look up “dingo,” as he hadn’t known what one was. From this statement we can infer that he was also ignorant of the popular cultural references associated with dingoes and babies.)

Several weeks later, on a show about predatory lending, Oliver slimmed the joke down to the catchy idiom, “I call dingo!” in reference to the even crazier conflicts of interest between the Texas legislature and the payday loan industry. This is a construction and usage similar to that of calling shenanigans: “shenanigans” as a noun, meaning “dishonest maneuvering,” or, more innocuously, “practical jokes” or “mischief,” goes back a few centuries, but the popularity of the accusatory construction “to call shenanigans,” meaning “to cry foul,” seems to be traceable to a 1998 episode of South Park (although Kyle declares, not calls, shenanigans):

Neologisms are often born of necessity, and that’s what I love about these three  constructions: they all pretty much mean “bullshit” (either as a noun or an interjection), but with more specific (and timely/topical) shades of meaning, as well as having the additional benefit of being non-expletives.

Truthiness, while infrequently having been used as a synonym for “truthfulness” in centuries past, was redefined and popularized by Stephen Colbert: “Truthiness is, ‘What I say is right, and [nothing] anyone else says could possibly be true.’ It’s not only that I feel it to be true, but that I feel it to be true. There’s not only an emotional quality, but there’s a selfish quality.”

(Tangentially, the original dingo story, that of the murder conviction (now overturned) of Lindy Chamberlain, mother of an infant girl taken by dingoes in central Australia in 1980, could be considered a case of truthiness over truth—it is widely believed that Chamberlain and her husband were accused and convicted of murder, despite all evidence to the contrary, in large part due to a belief that Chamberlain did not appear to behave in a way that one would consider “normal” for a grieving mother. In other words, regardless of the coroner’s report, the physical evidence, witness testimony, etc., the “gut feeling” people seemed to have at the time was that Chamberlain wasn’t hysterical enough, and therefore must be guilty of infanticide.)

Now I’m sure some of the “word police,” the “wordinistas” over at Webster’s, are gonna say, “Hey, that’s not a word.” Well, anybody who knows me knows I’m no fan of dictionaries or reference books. They’re elitist — constantly telling us what is or isn’t true, or what did or didn’t happen.
——Stephen Colbert, The Colbert Report (premiere episode), 2005

“Truthiness” served such a pointed and immediate need in America’s vocabulary that it was Merriam-Webster’s 2006 Word of the Year:

1. truthiness (noun)
1 : “truth that comes from the gut, not books” (Stephen Colbert, Comedy Central’s “The Colbert Report,” October 2005)
2 : “the quality of preferring concepts or facts one wishes to be true, rather than concepts or facts known to be true” (American Dialect Society, January 2006)

(Interestingly, while this definition comes from the Word of the Year link above, the word truthiness itself does not yet show up in a word query on m-w.com.)

I call shenanigans! is most comparable in meaning to “I call bullshit!” The “I call” [bullshit/shenanigans/dingo] preface to the respective object words is a semantic pleonasm, meaning that the nouns used alone (as interjections) are understood to mean the same thing as their full idiomatic phrases—calling “dingo!” means the same thing as “calling dingo.” (Or, to be more clear, “dingo!” is synonymous with “I call dingo.”)

Dingo! or I call dingo! borrows its syntax from earlier phrases (cf. “Shotgun!“), but its meaning is distinct and precise; it refers specifically to conflicts of interest—a particular sort of political shenanigans. Besides the current usefulness of having a pithier way to say “conflict of interest,” it is a particularly nice bit of coinage in that it sounds like “Bingo!”—another called-out declaratory interjection. With the extraordinary amount of conflicts of interest in American governance today, I can envision “dingo!” becoming a meaningful and widely used term. Good on yer, John O!